A former foster mom and alumna of Johns Hopkins University, China Boak Terrell has spent her life and career fighting for ordinary people to have extraordinary chances to live their dreams. China is running for Delegate to the Maryland Legislature, to continue this fight for District 40 residents.

China is not your status quo. China values the people. And she has the skills to rebuild the city. Her results in positively transforming the city set her apart from every other candidate.

Since 2016, China has served as CEO of American Communities Trust, Inc.  ACT is a public charity dedicated to creating inclusive economic development that brings growth and prosperity to low-income residents.  Working with residents over four years—equal to a legislative term—China has:

China has a long history of advocacy with results for working-class communities.  China founded and served as President of her past tenants’ association.  In that role, China fought for rent control and tenants’ rights.  Through her advocacy and leadership, China successfully prevented displacement and preserved affordable housing for 33 families, including seniors living on fixed incomes.

China has fought for small businesses, securing nearly $1 million in grant opportunities and incentives for them. While a community representative, China fought for and won the complete redesign of a $2 million street project that threatened to upend the character of a historic neighborhood. In one year, China held more than 25 community meetings and sent over 1000 emails to city officials.

Servant for the Voiceless

As a volunteer lawyer for foster children for five years, China fought to amplify the voices of young people who would have been lost in an overwhelmed system. As a volunteer in a juvenile detention center, China spent three years mentoring young girls awaiting arraignment for prostitution, assault, or selling drugs.

China has been an activist leader on issues of police reform and legitimacy, securing and producing the first national interview with former Chicago Police Chief Garry McCarthy following the tragic shooting of Laquan MacDonald. With partners whom she recruited, China developed and ran an education series designed to sensitize future political leaders and police officers on the impact of law enforcement activities in black and brown neighborhoods.

China is the former General Counsel to the DC Council’s Committee on Human Services.  There, she drafted and advanced numerous legislation, including ensuring social services support for families whose children were not showing up at elementary school.  This legislation was a key strategy in reducing chronic absenteeism among young children.

Through the American Heart Association, China has spoken to thousands of women about the importance of self-care.  China shares her own story of having emergency open heart surgery and living to share what she learned. Confronting her own mortality is what led China to shift from her decade long practice in corporate law, to community building.

China has a Master in Public Administration from the Harvard University John F. Kennedy School of Government. She is published through Harvard’s Joint Center on Housing Studies on the topic of supportive housing for the homeless.

Above All, a Friend, Wife, and Mom

China is happily married to an economics and politics journalist, who pre-COVID-19 took the train to DC each day from their home in Bolton Hill. He’s also a longtime union man, now in the NewsGuild. Together they have an exquisite three-year old daughter, proudly born in Baltimore at The Johns Hopkins University Hospital.

In their spare time, they love making dinner or enjoying the outdoors with other families. Getting icees ranks pretty high too. Taking evening walks through Baltimore’s main streets or just around the hood can’t be beat. And celebrating Loving Day is a family tradition for this proud interracial family. Loving Day (June 12) celebrates the day the US Supreme Court said you can marry anyone you love regardless of that person’s race. 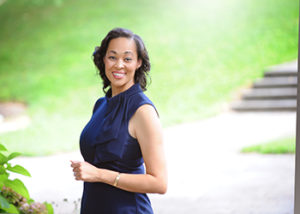 ONE OF 25 WOMEN TO WATCH
(Baltimore Sun)